While I’m not sure if all writers have itchy feet, I know I do. (Clarification: I mean in the travelling sense, not the ‘too many scungy gym shower floors’ sense, naturally.) It’s one reason I started writing in the first place – and particularly travel writing. What better excuse to keep exploring the globe than ‘It’s for work’?

Travel writing is just one part of my job, but when I analyse each of its parts, they’re all pretty damn good. Writing. Traveling. Teaching.  Speaking. For the most part, all things I really enjoy.  Dream job, right? Mostly, yes.

Some days, I do not like my job
That said, there are days I don’t want to do any of those things. Where I don’t want to see a computer. Plan an itinerary. Pitch a story. Edit my own work. Edit other people’s work. Nada. Work, after all, is work, no matter how much you disguise it.

I’d be lying if I said that, if given an unexpected windfall I’d work in exactly the same way.  But in the absence of a large inheritance (“Great, Great Auntie Mabel, are you out there?”) or the winning lottery ticket (that one’s my fault, I don’t actually buy them), I’ve long taken the view that finding ­work that makes me happy is vital.  And it’s up to me to be an active participant in making it happen.

Scoring the job of your dreams 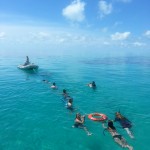 I’ve blogged about scoring your dream job before, but the topic rose again last week when I spent a day on the Great Barrier Reef with Big Mama Sailing. Yes, for work. (Clearly, this was NOT one of the days I was sick of my job.)

The owner of the sailboat, Lisa, has what many would consider a fantasy life. With her partner of 18 years, Stu, and her 7-year-old, Fletcher, Lisa lives on a 60-foot yacht. Full-time.  Yep, most of Lisa’s adult life has been spent cruising South-East Asia or other parts of the Asia Pacific.

“I can’t do the house with four walls thing,” she told me, shuddering at the memory.

To make it pay, Lisa and Stu have taken the odd land-lubbing job, but those times have been one off, temporary stints, not their default position. Instead, they’ve gotten creative about how make a life at sea sustainable.  They’ve captained other people’s yachts, fixed boats up and sold them, and when they haven’t had the spare cash to buy one, they gotten proactive.

How a rescued boat salvaged a dream job 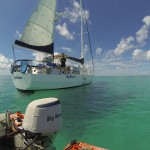 “Up in Darwin we found a salvaged boat that had washed up after a cyclone,” Lisa told me as she put the finishing touches on some home made scones (yes, scones while cruising the Barrier Reef, she’s thought of everything).

“We tracked down the owner and asked if he wanted it. He said, ‘Nope, you can have it’,” she explained.

“For six weeks, Stu fixed the salvaged boat every day, and worked on other people’s boats at night. I worked a day job in education, worked nights on the boats and helped him on my days off.”

That was the reality behind the fantasy.  Long days of some seriously hard slog, as well as some impressive juggling. But in just six weeks they were done, sold the salvaged boat for a tidy sum (no, I didn’t ask!) and gained themselves freedom to keep the dream alive. It’s a pattern they’ve stuck to – do what needs to happen to make it work, make some short-term sacrifices for the big picture, and keep your eye on the prize. Needless to say, Stu and Lisa’s land-lubbing jobs were quickly ditched as they headed back to sea.

Why tell you about Lisa?

Because to me, Lisa represents a good life lesson. OF COURSE you can have a job you love, but you need to do a few things to get it, and more importantly, to keep it.

Here are 3 secrets to scoring your dream job:

You also need to be realistic about the fantasy you’re working towards.

No job will be perfect. No career ticks every box, every day. But maybe that doesn’t matter.

At the end of her day showing us round the reef, Lisa was off to drive 40 minutes into the hills to buy supplies for the tourists coming in the next morning.  Actually, that’s 40 minutes to get there, an hour of shopping, and 40 minutes back, before (presumably) dinner, some work emails, and then bed.  The next day she was getting up early to prepare for another reef trip.  Lisa’s putting in 12-hour plus days at the moment, to ensure her dream stays alive.  Don’t get me wrong, she’s not complaining. In fact, she’s pretty darn happy.  (Actually, Lisa’s so happy she is one of those people everyone hugs after knowing her for just one day, because she’s just such a lovely being.  Even the silent 15 year-old boy who didn’t speak a word to anyone all day let Lisa give him a hug, something his mother probably hasn’t been able to achieve for a year! Such are Lisa’s powers…)

That day, I had a far easier ride than Lisa. I went home to the resort I’m staying and had the night off. But Sunday was spent writing up my story on the region, and Monday, I was up super early to tackle my own email deluge before driving to the next spot on my travel writing itinerary.

I’m guessing both of us reckon it’s a small price to pay for our dream jobs. But both of are realistic and focused on what it takes to get – and keep – the dream alive.

Maybe you can do the same?

So – for the comments section:

What’s your dream job?  What steps are you putting in place to make it happen? Are you willing to make some short-term concessions to reach your long-term goal?