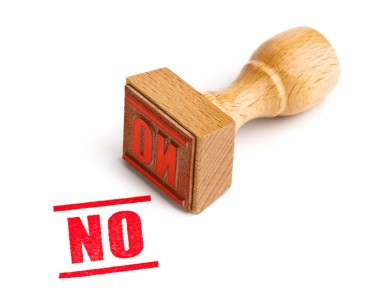 I’m a big fan of to do lists. But recently I’ve realised I also work most efficiently when I’m abiding by my ‘not to do‘ list.

The concept – not rocket science but SO useful – is that while the items on your to do list are important, so are the items which aren’t. Basically, your not to do list will be filled with a bunch of don‘ts. Sticking to those is key to getting through your list of ‘do’s‘.

(For the record: This isn’t my own brilliant discovery.  My prompt on ‘not to do’ lists came via a post from author Tim Ferriss, and I’m pretty sure he’s not the first to talk about this.)

Since I’ve been self employed (Years now! Seven? Eight? Ten? It’s a happy blur) I’ve constantly been refining my list of ‘dont’s‘. A few of those include:

I like to think of my ongoing don’ts as unwritten rules. Rules that help me work smarter. Guidelines that keep me sane. Let’s face it – when working for yourself it’s particularly important you set some boundaries around how you operate: nobody else is going to do it!

Remember – your not to do list isn’t a ‘get out of jail free’ card.
Obviously, if you ARE going to implement a not to do list, you’ll want a pretty good to do list to balance it out. The concept isn’t about letting go of your goals and sitting back on the couch all day.

But I suspect that if you’re here, and you’ve read this far, you’re probably not doing too much resting on your laurels. In fact, I’m pretty confident that, like me, you often have a ridiculously long to do list or two lying around.  If so, why not join me in starting your own not to do list, and pull things back to a smart, sustainable pace?

What’s on your ‘NOT to do’ list?  Considering adding anything after reading this?